Regulate it. Tax it. Support the NHS. Promote public health.

Nowhere are the foundations of this new approach to drugs more obvious than in the global movement towards regulated, legalised cannabis markets. In 2018 Canada became the first G7 country to legalise cannabis! And despite the US being the ostensible leader of the ‘war on drugs’, it has been US states at the forefront of this move. The results from the US so far are generally positive: confounding critics whilst bringing in additional tax income to fund public services.

Regulating and legalising cannabis is an idea whose time has come.

It is time to accept that prohibition is not only ineffective and expensive, but that regulation could – if it is done well – protect vulnerable groups and support public health. It would also generate both taxes (at least £1 billion annually, but potentially more) and savings, which taken together would mean more resources for health, harm reduction and other public services. 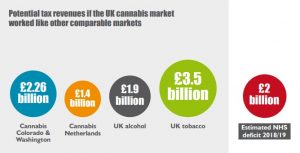 It is time for the UK government to catch up with the global shift and take the responsible approach by bringing in a regulated, legal market for cannabis.

To do this the UK government should

Sign our petition to demand the UK government act and support the legalisation and regulation of cannabis NOW.