We held three exciting events with our partners at the Labour Party Conference.

The first was a jam-packed evening reception exploring the need for a new internationalism based on solidarity with movements and struggles across the world. We heard from Shadow Secretary of State for International Development Dan Carden MP, author, activist and editor Firoze Manji, author Maya Goodfellow, Jdeiya – an activist from Western Sahara who also spoke on the international panel at Party Conference mainstage the following day, and a representative from the brilliant Fight for 15 campaign in the US. They all offered in credibly inspiring words, highlighting the importance of working together to build a new internationalism.

We held a panel discussion with our friends at Transform Drug Policy Foundation and Anyone’s Child discussing the need for drug policy reform both domestically and internationally, exploring what this should look like to ensure that the rights and livelihoods of communities who have been most impacted by prohibition are upheld. The event was really well attended as we heard powerful contributions from David Lammy MP, Jonathan Ashworth MP, Councillor Asher Craig, Pat Hudson from the Anyone’s Child Campaign, Philasande Mahlakata from the Umzimvubu Farmers Support Network in South Africa and our very own Martin Drewry. It was fantastic to hear both David Lammy and Jonathan Ashworth acknowledge the failure of the ‘war on drugs’, advocating for drug policy reform centred of public health and social justice! Read more about our work on this here. 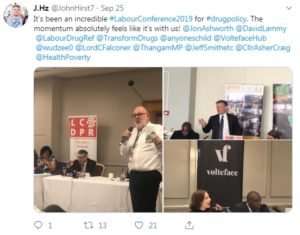 We also held a panel discussion exploring the vital role public services can play in tackling global inequality with Global Justice Now and Unison where we heard from Dan Carden MP, Preet Kaur Gill MP, Nick Dearden from Global Justice Now, James Anthony from Unison, Baba Aye from Public Services International and our own Natalie Sharples, Head of Policy and Campaigns at Health Poverty Action. We were excited to hear Dan Carden share Labour’s vision to stop using international development to privatise public services around the world, instead working to build strong public services globally with governments and social movements that work for people, not profit.

Running alongside the Labour Party Conference was The World Transformed – a vibrant 4 day politics, arts and music festival – where we hosted a lively discussion on how we can shape anti-imperialist international policies, and what these should look like.

The room as absolutely jam-packed as we heard from Dan Carden MP, Maya Goodfellow, Firoze Manji, Elif Sarican from the Kurdish Women’s Movement and Natalie Sharples exploring what anti-imperialist policies should look like, the role of Labour’s Department for International Development should play and how we can dismantle the age-old language of aid and charity that serves to maintain and entrench colonial and imperial mind-sets about the world.

It was fantastic to be a part of so many sessions across the last few days and join in the action across Brighton. We look forward to continuing these conversations in the future and working together to build international solidarity for Health for All.