For many, New Year is an opportunity to start looking after yourself more. There are now lots of ways to make health and well being social; Veganuary and Dry January are just two examples of how sharing your goals can make them more achievable.
But for a lot of people, there are some more simple ways to improve your overall health in the long term, which don’t involve giving something up in the short term. Curry can have a bad reputation; many think of it as a heavy, fattening meal, rich with ghee. However, this perception is unfair and somewhat based on a ‘British Takeaway’ exposure.
Turmeric is one of the most frequently used spices in curries. Not only is turmeric the most wonderfully vibrant, great tasting spice, it also packs some wonderful health benefits.

Turmeric is great for those who have also started the New Year by being more active or those who have had exercise as part of their regime for some time. You know that ‘achy’ feeling you get a few hours after exercise (which can sometimes last for days)? Part of this ache is cause by inflammation. Whilst some inflammation is a good thing, after all, it is your body ‘healing’ itself – hobbling around for two days after a run is no fun. Turmeric is an anti-inflammatory, which some experts believe rival ibuprofen.
As an anti-inflammatory, it can also ease some of the pain associated with rheumatoid arthritis.

Research varies on this one, but turmeric has been shown to prevent or treat some cancers in conjunction with chemotherapy. A small study on patients with precancerous changes showed that turmeric could potentially stop these changes from developing into cancer.
As Turmeric contains turmerone and curcumin. These two chemicals can help prevent and treat various diseases. Turmerone especially

Some studies have suggested turmeric could increase bone regrowth, connectivity and repair, which is potentially good news for suffers of osteoporosis or anyone with a fracture.
It’s important that you take the time to look after yourself – eating lots of turmeric isn’t going to guarantee you never ache from exercise or become ill; but it does mean there is always a place for a curry in a healthy diet.
Why not invite your friends around, host a Curry for Change and wow them with your turmeric knowledge and cooking.

Some recipes to inspire you 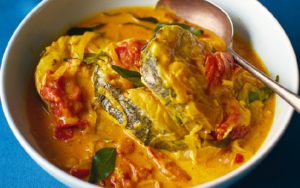 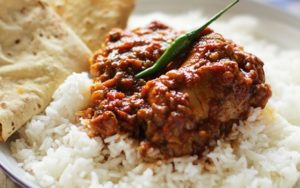 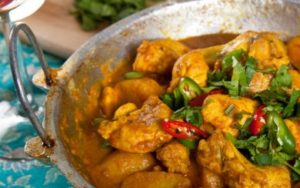 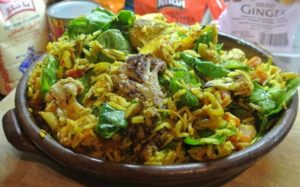