Drugs are a development issue. Let’s stop pretending that they’re not.

The so-called ‘war on drugs’ has been undermining progress towards development goals for decades. It has fuelled violence and conflict, undermined democracy, and driven poverty, inequality and poor health worldwide.

The shift towards the legal regulation of drugs provides a chance to repair the harms of the past – and create a fairer, more just world for the future. Now is the time to build a new approach to drugs that prioritises, promotes and protects health and well-being, helps address poverty and inequality, and contributes to achieving the Sustainable Development Goals (SDGs).

Featuring  speakers from the development sector, drug policy reform movement, and civil society, we will explore how drug policies intersect with some of the most pressing issues facing the Global South today.

Join us for this ground-breaking 8-part webinar series as we explore how legally regulated drug markets can work for people and the environment  – while avoiding the exploitation and inequality fuelled by years of prohibition policies.

Register for each webinar individually below.

Webinars will be in English. Spanish translation TBC. 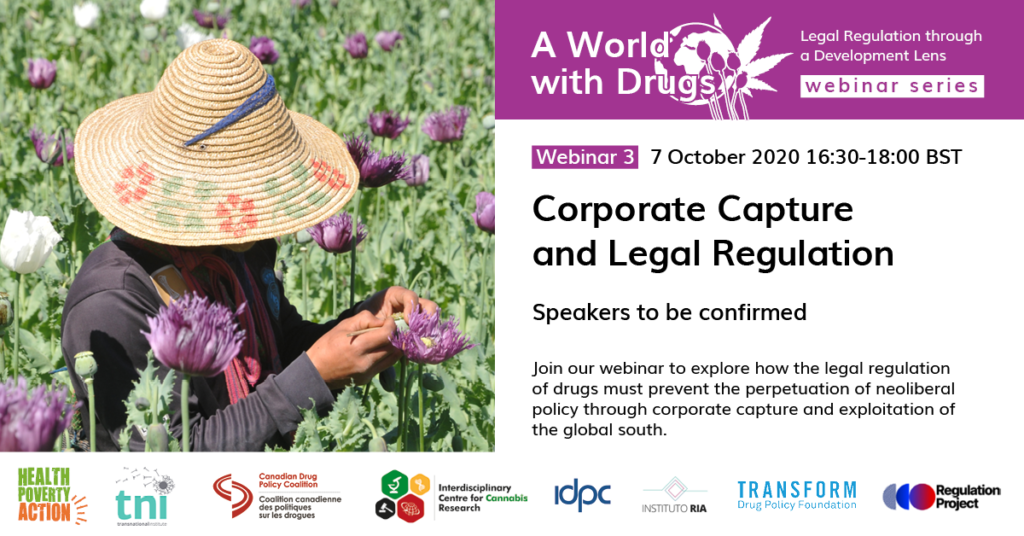 As we move towards the legal regulation of drugs, we risk growing the unaccountable power of corporations poised to exploit the drugs market – at the expense of the small-scale growers and traders whose livelihoods have long-depended on the trade.

In this webinar, we will explore what can be done to support small-scale growers and traders entering and competing in legally regulated markets. We will investigate what needs to happen to prevent wealthy corporations – like Big Pharma – dominating the drugs trade, and how we can avoid further inflating corporate power. 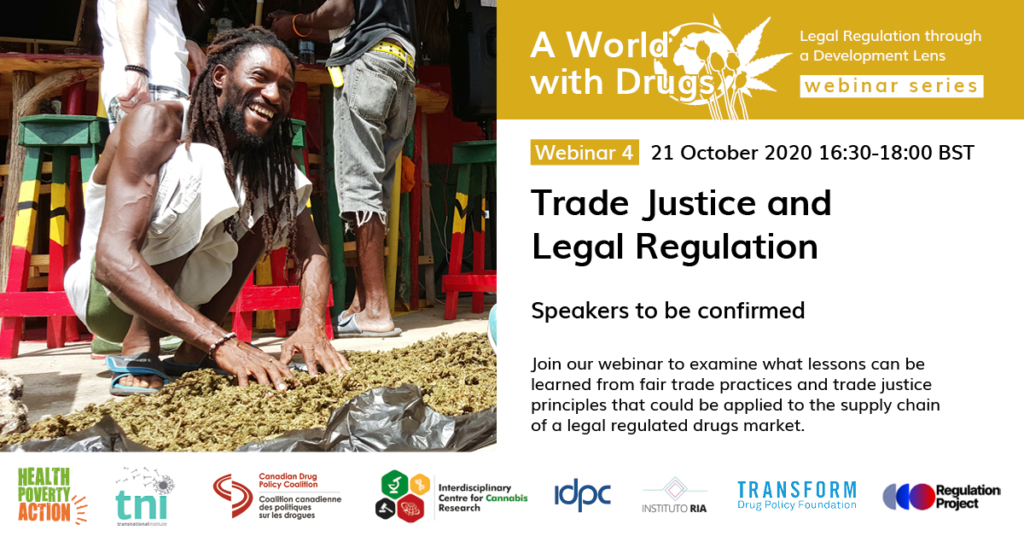 Join us for the fourth webinar in this series where we will discuss how trade policies can protect the most vulnerable. We will explore the lessons we can learn from Fair Trade practices and how this can be applied to a legally regulated drugs markets. 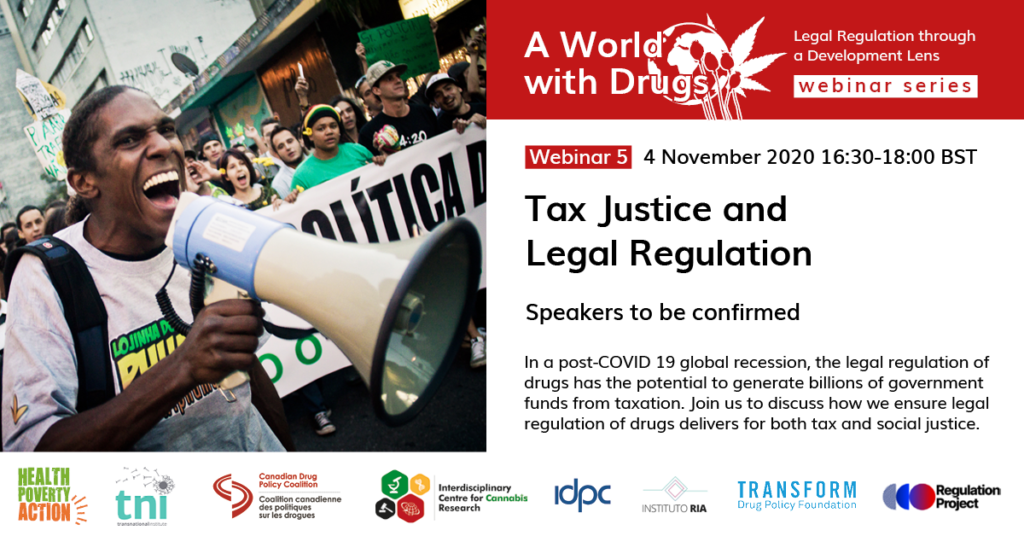 Money from the drugs trade is hidden away in money laundering schemes and tax havens all over the globe. While those at the top of the trade have huge wealth, the communities most impacted by it see little of this money. The legal regulation of drugs provides us an opportunity to rectify this.

Furthermore, the legal regulation of drugs could generate billions in government revenue from taxation, which could be spent on repairing the harms of past drug policies and on vital public services like health and education.

In this webinar, we will explore what policies would need to be in place to deliver tax justice in a legally regulated drugs trade. 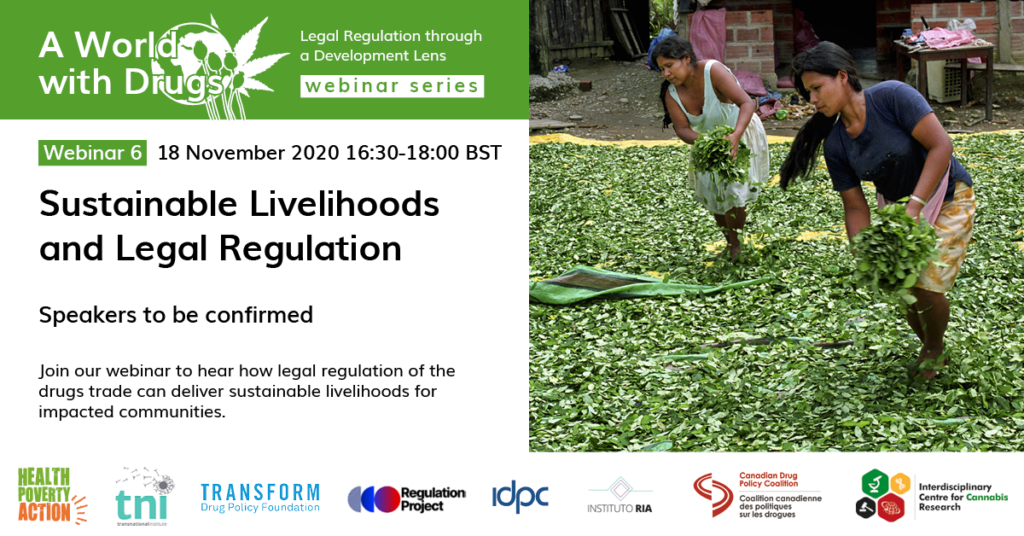 In this webinar, we will explore how people across the global South engage in the drugs trade throughout the supply chain, and the impact of current prohibition policies on people’s ability to earn a living.

Our speakers will explore how the drugs trade can provide sustainable livelihoods for impacted communities, including through transitioning to legally regulated drug crop products. 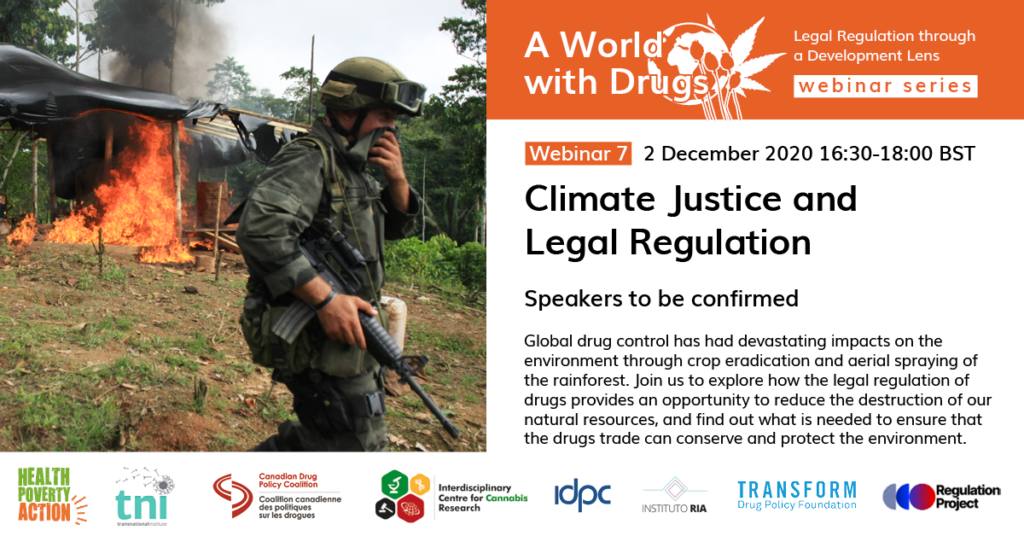 Global drug control has had devastating impacts on the environment. Enforced crop eradication, deforestation, aerial spraying and major disruption to ecosystems are all common consequences of the ‘war on drugs’  – and are often overlooked.

In this webinar, we bring the voices of those affected by these issues and the environmental movement together, to explore how the legal regulation of drugs provides an opportunity to reduce the destruction of finite natural resources. We’ll look at what a legally regulated drugs trade needs to do to support climate justice and protect the environment. 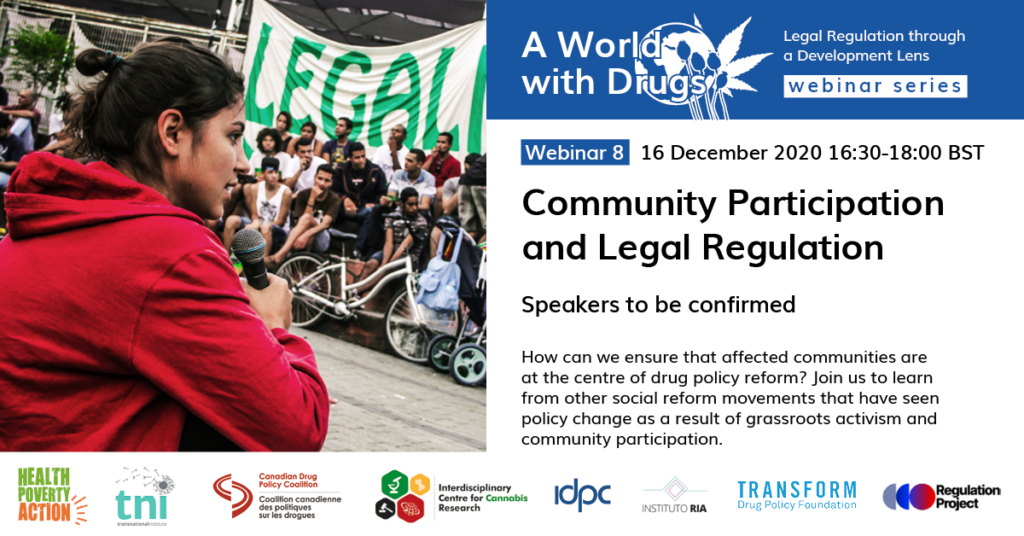 The input of people affected by prohibition, whose livelihoods are reliant on the drugs trade, is essential to the design and implementation of any drug policy reforms. In this webinar, we are bringing together change-makers from other social reform movements to identify how to ensure impacted communities are at the heart of legal regulation policy, and how to overcome barriers to engagement in a currently-illicit trade.

For the second webinar, we dive into how the structures upholding the ‘war on drugs’ are rooted in racism and imperialism. For over 60 years, prohibition-based drug policies have disproportionately impacted BIPOC and people in the Global South, through racially targeted law enforcement, mass incarceration, crop spraying and crop eradication. Yet in many parts of the world, the growing and taking of drugs is central to people’s culture.

Join us to explore how the legal regulation of drugs can instead ensure cultural, traditional and indigenous rights are placed at the heart of drug policy, and help Leave No One Behind in efforts to achieve the SDGs.

Webinar 1: Drugs are a Development Issue. An Introduction to Legal Regulation

Helen Clark is the newly appointed Chair of the Global Commission on Drugs Policy. Helen has also served as Administrator of the United Nations Development Program and the Chair of the United Nations Development Group. Prior to her appointment with UNDP, Helen Clark was the first woman elected as Prime Minister of New Zealand, serving three successive terms from 1999 to 2008. Helen Clark is a champion of inclusive and sustainable development and an advocate for drug policy reform.

Philasande Mahlakata is Project Coordinator for Umzimvubu Farmers Support Network. UFSN is based in Mpondoland in the Eastern Cape province of South Africa. The network currently sits on the provincial government initiated steering committee for the development of the cannabis industry.

Dr Duncan Green is Senior Strategic Adviser at Oxfam GB and Professor in Practice in International Development at the London School of Economics. He is author of How Change Happens and From Poverty to Power: How Active Citizens and Effective States can Change the World.  He also writes a daily development blog.

Ann Fordham directs the work of International Drugs Policy Consortium. Ann leads on international advocacy efforts on drug policy and human rights, specifically calling for reform of laws and policies that have proven ineffective in reducing the scale of the drug market and have negatively impacted vulnerable population groups such as people who use drugs and growers of illicit crops. Ann is the Chair of the Strategic Advisory Group to the United Nations on drug use and HIV.

In the first of our 8 webinars, we launch with a rallying call to action.

Legal regulation has the potential to provide redress for the decades of untold misery and destroyed lives resulting from prohibition across the world. It is critical for sustainable development.

Speakers include the International Drug Policy Consortium who will launch their  ‘Principles for the responsible legal regulation of cannabis’, a visionary document that places human rights, social justice, social equity and gender equality at the centre of a framework for legal regulation. While focused on cannabis, the principles are a helpful lens for all drug trades.  We are delighted to be using this framework as our guide on this series.

This webinar will further explore how legal regulation can be implemented to deliver for social justice and the SDGs –  setting the scene for the rest of the series.

The ’war on drugs’ is collapsing. Now let’s build the alternative.

How the War on Drugs is harming the world’s poorest