Entitled “Changing track: putting people before corporations”, the briefing details how governments around the world are allowing billions of dollars to be diverted to corporations every year at the cost of human rights and public services. We estimate that the amount of money being diverted every year amounts to over $1 trillion (or a million million). That’s enough money to fund the NHS six times over, cancel all government debt of impoverished countries or triple the money spent on healthcare for half the world’s population.

The way the economy is structured is failing people and public services. The time has come for governments to redefine their priorities, repair the damage done and redistribute wealth to all citizens. And change is happening already! All around the world, communities and campaigners are reclaiming power from corporations: 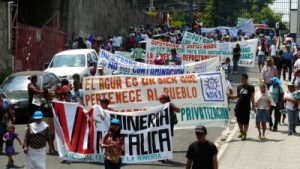